One of the reasons man boobs are more common today than they were just 50 years ago, is because of environmental chemicals.

The chemical industry pumps out hundreds of thousands of chemicals every year, and a lot of these chemicals are used in food. Back when I was researching this, I was alarmed to discover how little we know about the long-term effects of the vast majority of the chemicals used in food.

More and more people, scientists and doctors included, are starting to recognize the link between the rise of chemicals in food, and the rise of the big killers in modern society – the likes of heart disease, diabetes and cancer, and also dozens of other illnesses like inflammatory bowel disease, asthma, irritable bowel syndrome, depression, Alzheimer's, and yes, man boobs!

As I mention in How To Lose Man Boobs Naturally, one of the keys to getting rid of those man boobs is to avoid environmental chemicals. 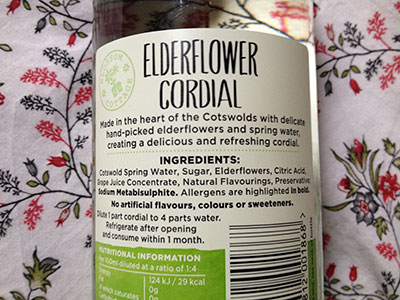 Note how these clever bastards have written in bold, “No artificial flavours, colours or sweeteners”. They left out the fact that they are using an artificial preservative, namely, sodium metabisulphite.

The true extent of sodium metabisulphite's toxic effects on the body is unknown, which is reason enough for us not to ingest the stuff. From what we do know, it is a known stomach, lung, and skin irritant.

The message I want to leave with you today, is always look at the ingredients label – even if it says “all natural” on the bottle, or as in this case, “No artificial flavors, colors or sweeteners”.

Artificial chemicals are everywhere in the modern environment. No matter how hard you try, you probably won't be able to avoid it all. But the more you can avoid, the better off you'll be. Remember, there are also some very powerful foods out there that can help you combat the negative effects of artificial chemicals. Here's one such food I wrote about earlier.

The best way to get rid of man boobs is to not only avoid those chemicals and eat chemical-combating super-foods, but to adopt a powerful step-by-step regimen for getting rid of man boobs. The kind I outline in How To Lose Man Boobs Naturally.