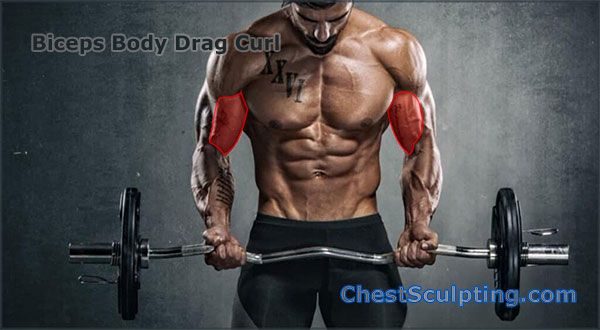 The Biceps Body Drag Curl is a replacement exercise for the standard biceps curl.

Popularized by the late Vince Gironda, the biceps body drag curl, in Gironda's words, “will perpetuate the involvement of the biceps and take the pressure off the front deltoids”.

The trouble with the standard dumbbell/barbell biceps curl, is that due to the arc-like movement of the exercise, your biceps muscle is only really stimulated during the middle of the movement, when your forearm is horizontal to the floor.

Next time you do biceps curls, notice how the beginning and end of the movement are easy, while it gets really tough when your forearm is horizontal.

This is because gravity only pulls downwards. At the bottom of the movement, you are moving the weight almost horizontally. As the weight follows the arc, it becomes gradually more vertical, hence gravity gradually has a greater effect.

When your forearm is horizontal, that's when the weight is moving vertically and directly against gravity, so that's when the exercise becomes toughest, that's the ONLY time your biceps are working at their maximum.

For the rest of the movement, you are wasting time. Worse than this, is the fact that you are only training the middle bulk of the muscle.

So if you only use the traditional biceps curl exercise, you will end up with biceps that stick out in the middle like there's a tennis-ball inside. Though some guys might think this looks cool, what looks REALLY cool is a biceps muscle with uniform development from it's insertion point at the elbow, to the origin around the shoulder region.

You get some of the best, uniform biceps development when you do compound exercises like chinups, pullups, pulldowns, and barbell rows.

The first port of call when developing big arms, should always be compound exercises like the ones above.

However, studies show that isolation exercises do provide more stimulation of the isolated muscle than a compound exercise.

What natural bodybuilders do, is work on core compound exercises during the off-season, and add in isolation exercises before competition.

What I advise YOU to do, is focus on the core exercises until you have developed a decent physique. Then add in isolation exercises, to take things further, to add further development to your muscles.

So which isolation exercise should you do to develop the biceps?

Well, one of my favorites is the biceps cable curl. This is exactly the same movement as the traditional barbell/dumbbell biceps curl, only you are using a cable machine with a pulley.

Arc-like exercises like the biceps curl, are one of those rare cases where a cable machine is better than using free weights.

The cable-pulley system almost eliminates the problem of the arc, by making sure there is more uniform tension throughout the movement.

But what do you do when you don't have access to a cable machine?

The biceps body drag curl is a variation of the barbell biceps curl, popularized by the late Vince Gironda.

In this exercise, the barbell moves in less of an arc, and more of a straight line. This makes sure the tension on your biceps is always on.

Bend your elbows a little so they are behind your torso.

The pump you feel with this exercise will be intense, and you'll have to resist the temptation to move your elbows forward to make the exercise easier.

Remember that though the body drag curl can give you big guns, it will do little in your quest to lose chest fat or to build an overall impressive physique.

To lose chest fat and build a body you can be proud of to show off in the summer, you have to focus on the big compound exercises that target those larger muscle groups.

Even to build big arms, you need to first focus on compound lifts. Only once you have mastered the core compound lifts, does it make sense to add on supplementary exercises like the body drag curl.

To learn about compound exercises for sculpting your chest, building big arms, and carving out a body you can show off at the beach, get yourself a copy of the Chest Sculpting Blueprint here: