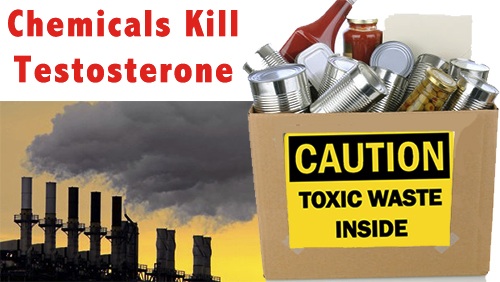 There are well over 100,000 registered estrogenic chemicals which are currently being used worldwide. This number is rapidly growing, and 99% of these chemicals are not regulated in the United States.

These chemicals are known to promote benign and malignant tumors in men and women (gynecomastia being a benign growth in men), and have been shown to result in devastating sterilizing effects on a wide range of different wildlife species and on human reproductive functions. They are found in virtually every synthetic product that we use or consume.

Look at the ingredients label on a bag of potato chips, and you'll find far more harmful ingredients than just refined carbs and trans-fats. Those two ingredients alone are bad enough to make any in-the-know guy with man boobs want to run the other way. You'll find a myriad of chemicals that are known to cause cancer, brain damage, and a huge list of other diseases. Many are also known hormone-disruptors that can lead to hormone-related cancers and man boobs. 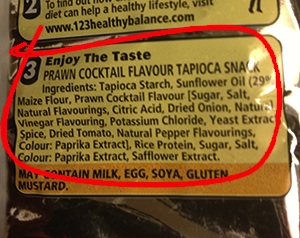 Below is an eye-opening video on the widespread use of chemicals in food.

The guy in this video presents it all as a big conspiracy theory. Whether or not you believe in the conspiracy theory that governments around the world are trying to sterilize us to control the population, the statements about the harmful nature of all of these chemicals in 80% or more of our food, are true.

Be aware of the dangerous chemicals in our food & take actions!

If you didn't watch the entire video, here are the parts I found interesting:

The truth is, the chemical industry is so vast, and the food industry, including so many big and small businesses are so dependent on using chemicals in food, that the government is powerless to stop the use of harmful chemicals in what we eat.

As soon as the government steps in to ban the use of say trans-fats, the chemical industry will simply respond by finding a chemical alternative, which, by the way, they have. Trans-fats have been banned in certain cities in the U.S., but they've simply been replaced by ‘interesterified' fats, which are chemically different, so not subject to the same ban as trans-fats. But these new synthetic fats are just as bad for us as trans-fats. Some research even suggests they may be worse than trans-fats.

Other equally (or more) dangerous chemicals found in packaged, processed and fast food include…

Funny about those last two, because before I learned about acrylamide, I came across a number of studies that showed drinking too much coffee was linked to increased incidences of breast cancer in women. These increases in cancer were not related in any way to the caffeine content of the coffee, and the researchers concluded that excess coffee consumption leads to breast cancer via some unknown mechanism. It could very well have been the acrylamide that was causing it.

Animal studies also suggest that acrylamide acts on the testes to decrease testosterone.

2. Monosodium Glutamate and Other Excitotoxins

Excitotoxins have been associated with neurological disorders (migraines, seizures, etc), learning disorders in kids, dementia, and neurodegenerative disorders like Parkinson's and Alzheimer's disease. They are also known to cause obesity and wreak havoc on the body's hormonal system.

Examples include hydrolyzed vegetable protein and monosodium glutamate (MSG), which are flavor enhancers used in almost every processed food there is, and aspartame, an artificial sweetener used in diet drinks, sugar-free chewing gum, deserts and sweets.

There is plenty of scientific evidence to suggest that these excitotoxins cause disease, hormonal disruption, brain damage and obesity, even when taken in very small quantities. The FDA currently allows the use of these excitotoxins in food because studies have found that they don't cross the blood-brain barrier. But basic human anatomy reveals that not all of the brain is covered by the blood brain barrier…

The median eminence of the hypothalamus, the part of the brain that gives the initial order to create testosterone, is totally naked and exposed – it has to be because it needs to secrete and receive feedback from hormones. There's also the posterior pituitary gland, which receives the signal from the hypothalamus and instructs the testes to create and secrete testosterone. And there's the pineal gland, which needs to secrete hormones to regulate our sleep/wake cycle, and the ‘area postrema', which needs to be bare so it can detect toxins.

These neurotoxins act on these exposed brain areas by causing your brain cells to overwork themselves until they die.

Seeing as testosterone depends completely on the hypothalamic-pituitary-gonadal axis, killing your hypothalamus and your pituitary gland effectively kills your testosterone levels.

In a 2009 study on prepubertal rats and aspartame, the rats' hypothalami and pituitary glands were damaged to the point where testosterone release had gone right down. Quoting the study…

“The degenerative aspects of brain and pituitary observed in Aspartame-treated rats suggests that it is reasonable to assume that the same infant-to-adult relationship would be true for the Aspartame consumption in humans to children in the prepubertal period of development, especially.”

The bottom line is these flavor-enhancing excitotoxins, which are used virtually everywhere, kill your testosterone levels. If these weren't the guys that caused your man boobs in the first place, then they would have at least contributed, and I'll bet they're contributing right now toward preventing your chest from flattening out.

So next time you down that can of diet soda, or chew on a stick of sugar-free gum, remember that you're bathing your hypothalamus in a potent neurotoxin.

Now the use of these excitotoxins is more widespread than you can imagine. Think about it, this stuff goes beyond just the slight taste-enhancing effects of salt and pepper. MSG can make bland food taste delicious. Studies also suggest that MSG is extremely addictive and makes people eat more. The widespread use of MSG has no doubt played a big role in the obesity crisis in the west. Heck, scientists commonly use MSG to induce obesity in lab rats.

Keeping in mind the addictive and flavor-enhancing properties of MSG, and the fact that the government has no restrictions in place for the use of MSG in food, what restaurant owner in his right mind would NOT want to use boat-loads of MSG on his recipes? His customers will not just find his food delicious, they'll also literally get addicted and they'll keep coming back for more! 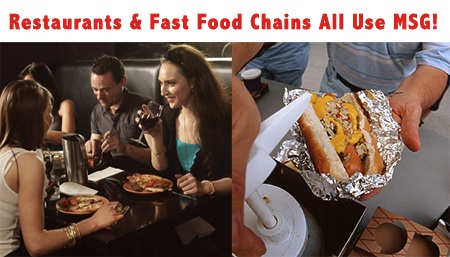 Same goes for all forms of processed food. If you invented a new sauce tomorrow, wouldn't you at least be tempted to add in a flavor enhancer? After all, the success of your new product, which you spent many laborious months getting to market, depends completely on how good it tastes, and how often people come back for more. Since 99% of the population are oblivious to the fact that these flavor enhancers are proven to cause brain damage, no-one will suspect a thing (and to be honest, in my experience, no-one really gives a damn even when you tell them).

Excitotoxins like MSG are hence widely used in restaurants and fast food outlets. Popular chains like Denny's, Subways, Burger King, McDonalds, Wendy's, Taco Bell, TGIF, Chilis', Applebees, Kentucky Fried Chicken… (you get the picture – everyone) are all known to make copious use of MSG.

So now you know why that Kentucky fried chicken skin always tastes so much better than your home-made stuff – their secret spice is MSG!

Toss out anything that comes in a box or bag. Stick to natural whole foods – real meat, fish, eggs, fruits, vegetables, nuts, seeds and high-fat dairy. Also, be smart when eating out – enquire about MSG and ask to see a list of ingredients. Look for the words “hydrogenated” or “partial hydrogenated”.

If you are going to buy pre-packaged, ready-made stuff, go organic where you can. Otherwise, study the ingredients label notoriously. It's difficult though, because MSG manufacturers do their very best to disguise the MSG added to food. Here's a partial list of the most common forms of MSG:

Additives That MAY Contain MSG:

Other Chemicals in Food

Other chemicals found in food include preservatives like BHA (a potential carcinogen) and BHT. Also, sodium nitrate, sulfites, tartrazine, emulsifying agents, high fructose corn syrup, and countless others. As I mentioned with MSG, your best bet at avoiding these chemicals is to avoid eating anything that comes in a box or bag. Focus the majority of your diet on natural whole foods (preferably organic), like meat, fish, eggs, fruits, vegetables, nuts and seeds – these are foods that have just ONE ingredient rather than fifty.

How To Survive The War Against Testosterone And Manliness

If you're in a fight, and all you do is avoid the other guy's punches, you're only ever going to get so far. You could be the best there is at avoiding punches, but if you don't hit back, you'll eventually lose the fight.

In the same way, avoiding exposure to environmental chemicals is not enough. You have to take active steps to help BOOST those testosterone levels. In the following article, you'll discover 4 of the most powerful ways to naturally boost testosterone levels: