Answer: It depends where you get your meat from

The Trouble With Hormone Treated Meat

Did you know that beef from the United States and Canada has been banned in Europe since 1988? The ban continues to this very day (at the time of writing this book), and both the U.S. and Canada are currently appealing against the ban.

Since the 1980s, livestock owners have been treating their animals with hormones, most notably estrogen. Today, an estimated 80% of cows in the U.S. receive an implant in their ear that delivers a hormone, usually a form of estrogen (estradiol) in combination with several other hormones.

The Canadian and United States governments have no qualms about treating our food with hormones, while the European Union has taken a stance toward protecting its citizens. Injecting hormones into animals is banned in Europe.

A hormone-treated animal will on average, grow 15% faster than a non-treated animal. As a result, livestock owners can make from 30-80 USD more per animal. That can lead to an insane boost in profit margins, and can rack up to millions of extra dollars every year for corporate livestock owners, and all of it at the expense of us, the country's poor, unsuspecting citizens.

The five types of hormone most widely used in meat production include three natural hormones, estradiol 17-b, testosterone and progesterone and three synthetic substances that act like hormones, zeranol, trenbolone, and melengestrol.

Since there haven't been any large population trials to directly link the use of hormones in the animals we eat to the rising rates of breast cancer, prostate cancer, and other diseases including idiopathic gynecomastia and pseudogynecomastia (man boobs), both food manufacturers in the U.S. and the FDA claim that it's ok to treat our animals with hormones because enough research has not yet been conducted to prove that it's unsafe.

Personally, I haven't heard anything more stupid in my life.

Usually what tends to happen with these things is around 50 years later, there'll be enough data from population studies to convince the government that scores of people have gotten cancer and died. This is exactly what happened with diethylstilbestrol (DES), a synthetic estrogen drug used from the 1950s to fatten both chicken and cattle. From 1940 to 1970 it was also given to pregnant women with the false claim that it would reduce the risk of pregnancy related complications.

It was withdrawn from use after it was found to increase the risk of cancer in women and cause gynecomastia in men. What's scary is that the use of DES on livestock wasn't completely withdrawn until around 1980, so it took almost 30 years for the government to take action. Imagine all the guys who suffered from gynecomastia during those years, who were told by their doctors it was ‘idiopathic', and worse, all the people who died from estrogen-induced cancers caused by the DES in their food. 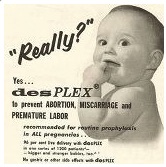 Diethylstilbestrol, a cancer-causing drug, was routinely given to pregnant women for 30 years before it was banned.

The bottom line here is, if you wait for the government to tell you something is unsafe, chances are you will end up being among the death statistics that makes the government change its mind 30-50 years down the line.

The arguments made by food manufacturers in support of using hormones to treat our animals, are laughable to say the least (they would be in support of it since it's they who stand to profit at the expense of our ill-health. I'll bet the higher paid guys in these organizations all eat and feed their families organic beef). Here are some excuses they are using:

Now since there are no large population studies demonstrating a direct link between the consumption of hormone-treated animals and gynecomastia in men, we have to use our judgement and common sense.

The European Union made the decision to ban the use of hormones in livestock because it believes there is enough indirect evidence to suggest it leads to increased incidences of breast cancer in women and reduced sperm counts in men.

Even the FDA doesn't deny that eating hormone-treated meat raises your blood levels of these hormones. The FDA simply claims that these levels are ‘safe'.

“So What's The Solution?” 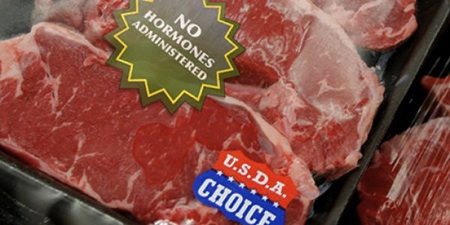 Foods that carry the “USDA-certified organic” label do not come from animals given any artificial hormones.

Note that currently in the U.S., federal regulations allow hormones to be used on cattle and sheep, but not on poultry (chickens, turkeys, ducks) or pigs.

Even if you live in Europe, non-organic animals are still treated heavily with antibiotics. They are also given feed that contains hormone-disrupting toxins including pesticides, herbicides, synthetic fertilizers or “bio-solid” fertilizers (recycled human excrement), and drugs to combat the myriad of diseases that come from keeping these poor animals so tightly packed together.

What If You Can't Go Organic?

If you can't go organic because it's too expensive or it isn't available in your area, consider purchasing your meat from a local farm. Many independent farmers and ranchers don’t use artificial hormones on their animals, since it isn't as cost-effective with smaller operations. Just check with the farmer to make sure no hormones are being used. Also check to see what kind of feed the animals are given. 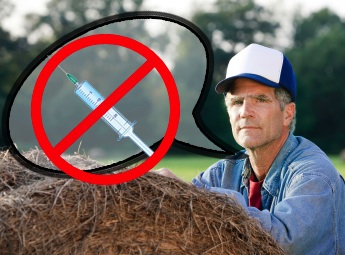 If you can't get organic meat, consider getting your meat from your local farmer. Smaller, local operations are less likely to use hormones.

Since the use of hormones in animals can be so insanely profitable, there's also the issue of black-market drugs and hormones on animals. Make sure you get your meat from a reputable source, or do your research when you buy from a local source.

If for whatever reason you aren't able to check for the use of hormones in your meat, or check for the use of chemicals in their feed, you might be better off opting for the leanest cuts of meat with as much of the fat as possible trimmed off. This is because most endocrine disrupting hormones are stored in the fat of an animal.

If you live outside of Canada, the U.S., or Europe, go on your government food regulation authority's website to see if hormones are being used on livestock in your country/area. You can also ask your farmer. Quite a few of my customers contact me from developing countries like India, Brazil and Mexico. I suspect hormone use in these countries is becoming more and more common as they become more available and more affordable over time. Also, in many developing nations, the government sets little or no restrictions on the use of artificial drugs and hormones on food.

A Final Word on Meat and Man Boobs

A lot of my customers assume after reading this section that I'm encouraging them to become vegetarian, but I'm not.

Studies have shown that vegetarians have lower levels of testosterone than meat eaters.

Believe it or not, testosterone is created from cholesterol. I've even found from my own experiments by testing blood testosterone levels in my self and in my clients, that eating fatty cuts of meat significantly boosts testosterone levels in men. Increasing animal fat consumption consistently helps my clients to lose body fat, grow muscle and flatten out their chests. So don't give up on meat, just be careful where you get it from.

To learn more about dietary tactics for boosting testosterone and losing man boobs, including unique exercises and other lifestyle changes for losing man boobs, check out this video on How To Lose Man Boobs Naturally:

6 thoughts on “Does Eating Meat Make Your Man Boobs Bigger?”