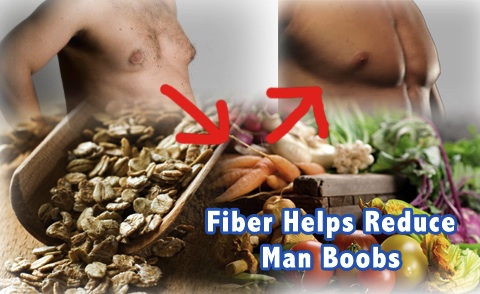 “How Does Fiber Shrink My Man Boobs?”

Fiber reduces the time available for estrogens to be absorbed in the bowel. Not only that, it also binds to extra estrogen in the gut and removes it from the body.

Studies have shown that people with a higher intake of dietary fiber have lower circulating estrogen levels. Researchers have found that the two potent female hormones estrone and estradiol drop sharply as dietary fiber intake increases.

Whole Grains Are Not Your Best Sources of Fiber

While it's true that these foods can contain a very high fiber content (provided they are truly whole-wheat and not just brown-colored semi-processed grains), I don't suggest you get your fiber from this source. There are a few reasons for this.

Grains are grains. They still have a high carb content. I personally found it difficult to lose weight when I switched from refined to whole-wheat grains. The only time I lost massive weight was when I let go of grains altogether. The same has been true for my clients.

Also, grains mostly contain insoluble fiber, while vegetables contain more soluble fiber. There are many studies that suggest most of the benefits of fiber – reduced cholesterol, improved bowel movements, reduced risk of cancer, diabetes prevention, etc – are bought about by soluble fiber in vegetables, rather than the insoluble fiber you find in whole-grains. 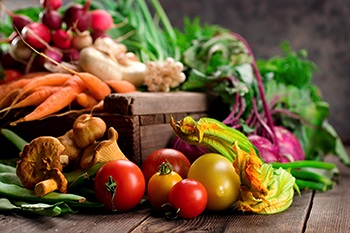 When it comes to reducing estrogen and losing man boobs, vegetables are a better source of fiber than whole-grains

Insoluble fiber is an inert polysaccharide that just passes through your gut, moving your stools along. Just the act of moving your stools faster through the intestines can be beneficial for your estrogen levels and general health, but being inert, there isn't much else your gut can do with it. Also, according to a review published in 2009 in “Topics in Clinical Nutrition”, an increase in insoluble fiber, by using wheat bran, for example, often aggravates gastrointestinal issues, while soluble fiber tends to improve these symptoms.

Unlike insoluble fiber, many forms of soluble fiber are fermentable ‘prebiotics' that can feed and support your gut flora, and help produce beneficial short chain fatty acids (SCFAs). A number of studies have suggested that SCFAs may reduce the risk of developing gastrointestinal disorders, cancer, and heart disease.

In particular, the SCFA butyrate, is known to reduce colonic pH. This is very important for estrogen metabolism. Most of the estrogen in your food is inactivated in your liver by a process called conjugation. Certain enzymes in your gut are known to deconjugate estrogen back to its active, harmful form, and this estrogen is then reabsorbed into your blood. By reducing the pH in your colon, butyrate helps to inactivate these estrogen reactivating enzymes.

So the bottom line here is, when you cut out grains from your diet, don't go full-on Atkin's by morphing into a complete carnivore. Think about replacing those carbs with plenty of fruits and vegetables. Meat is allowed of course, but you'd likely be better off if more of the space on your plate was occupied with fibrous veggie goodness.

Just as an extra suggestion, you may want to try something called psyllium seed powder as a natural supplement for soluble fiber. It's a soluble prebiotic fermentable fiber that has been shown to increase butyrate production by 42%, an effect that lasted for two months after treatment.

Though this stuff can't replace a good diet, using it occasionally to clear out your gut of all the excess fecal residue that builds up over the years, can really provide you with a much-needed boost. It's a super-fiber though, so be prepared to lose a couple of pounds of poop-weight in the process ;).

14 thoughts on “How Fiber Helps To Shrink Man Boobs”