Leptin is a satiety hormone.

It makes you feel full so you eat less.

It is made by fat cells.

The fatter you are, the more leptin there is in your system.

Leptin is carried by the bloodstream and into the brain, where it sends a signal to the hunger center in your brain, called the hypothalamus.

So you might conclude that the more leptin there is in your system, the less hungry you get, so the more weight you lose.

But you'd be dead wrong.

Sure, during the Paleolithic era, when man was on a 100% natural diet and lifestyle, when he ate a little too much and gained a little too much fat, leptin would sweep in and tell the brain to hold off on the hunger.

In this case, slightly elevated levels of leptin would help Paleolithic man lose the small amounts of excess fat he gained from overeating.

But that's not how it goes down today when people are HUGE and chocked full of chemicals and an unnatural diet.

The authors of scientific studies on leptin, constantly tell us how the elevated levels of leptin in obese people, doesn't seem to be doing its job of stopping hunger and getting people to lose the excess fat.

So what's going on?

What's happening today, is our cells are becoming leptin RESISTANT1.

In this case, things end up going the other way.

You get fat and produce lots of leptin, but you also become leptin resistant, so leptin no longer works so good. Instead of your appetite decreasing like it should, it stays the same or even INCREASES, so you keep eating more and stay fat or get even fatter.

Remember how previously I told you insulin is the body's most important fat storage hormone?

Well being in charge of hunger, leptin may play just a big a role in you being fat, and also in you having man boobs.

In science, we know a lot more about insulin, estrogen, and testosterone, than we know about leptin. It could be that leptin plays just a big a role as these big three hormones in deciding whether you are fat and whether you have man boobs.

The more carbs you eat, the more your body releases insulin to put those carbs away into your cells. Over time, your cells become insulin resistant, which leads to obesity, and often, man boobs.

Studies show that fat people have higher leptin levels than do thin people.

Just like insulin, having high levels of leptin floating around in your blood is a bad thing.

A lot of things that are bad for you, INCREASE your leptin levels. Here are some examples:

A lot of things that are good for you, DECREASE leptin levels. Examples:

So reducing leptin levels in your body is a good thing.

If you want to lose body fat or lose man boobs, you must reduce your leptin levels.

But there's more to it than just LEVELS of leptin.

Leptin SENSITIVITY is just as important.

Leptin sensitivity is the opposite of leptin resistance. The more leptin sensitive your cells are, the better the job leptin can do at reducing your appetite and boosting your metabolism.

So if you want to lose fat, get in shape, and lose man boobs, you need to do two things:

Remember, leptin controls your appetite. When you improve leptin sensitivity, you will lose fat because your hunger is decreasing and your metabolism is increasing.

When you make improving leptin sensitivity your focus, you reduce your weight set-point, where you become naturally lean, and don't feel like you have to work hard to maintain it.

Compare this to trying to force the fat off by eating less and exercising more, the way most people, including your doctor and most fitness professionals, advise you to do.

Just eating less and exercising more is no guarantee that you will improve your body's leptin sensitivity.

Without improving leptin sensitivity, the more you exercise, the less you eat, the hungrier you get. Losing weight like this is a struggle, a struggle that gets more and more difficult the more weight you lose, a struggle you have to keep up for the rest of your life if you want to keep the weight off.

If you improve leptin sensitivity on the other hand, the weight falls off naturally, because you just don't feel like eating all that much. In fact, staying fat would be a struggle, because the only way to stay fat would be by force-feeding yourself.

How Do You Lower Leptin And Boost Leptin Sensitivity?

Simple, do the list of healthy stuff I mentioned above: fast intermittently, do the right types of exercise, boost testosterone, and improve your sleep. Also, do the things I talk about in this article to help you lose man boobs.

Avoid sugar in your diet, reduce stress, meditate, and to shortcut the process, take a good turmeric supplement.

Leptin is a big player when it comes to weight loss, but it's also true that…

There is a strong relationship between leptin levels and levels of sex steroid hormones like estrogen and testosterone.

Leptin increases estrogen production and decreases testosterone levels by increasing the activity of the enzyme aromatase2, which converts testosterone to estrogen.

It seems that leptin and the evil man boob growing female sex hormone estrogen, are best friends, because estrogen increases the secretion of leptin too3. 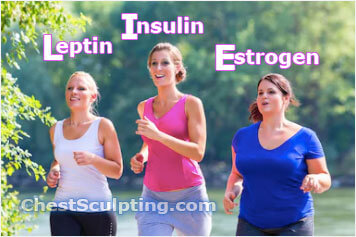 One study looked at hormone levels in a group of boys with pubertal gynecomastia, and a control group of normal boys without gynecomastia5. The study found that estrogen and testosterone levels were NORMAL in both groups. The only difference between the two groups was that the children with gynecomastia had higher levels of LEPTIN!

This isn't always the case however, since other studies have found a higher estrogen to testosterone ratio in boys with pubertal gynecomastia than in normal boys. But it does at least suggest that leptin plays an important role in the formation of man boobs.

Leptin, with its effects of breast tissue proliferation, is likely to be able to grow man boobs all on its own!

We also know that leptin increases the sensitivity of your breast cells to estrogen. It does this by stimulating the estrogen receptor6.

Hormone sensitivity is a BIG thing, it's the reason…

…Why Hormone Levels Don't Tell You The Full Story

You can have normal hormone levels, yet still have man boobs because the cells in your chest are too sensitive to estrogen or not sensitive enough to testosterone.

That's why I tell my clients to use my natural methods for losing man boobs, even if they do a hormone test and find that their hormone levels are normal.

A lot of natural methods that help reduce your estrogen levels, also reduce your body's sensitivity to estrogen.

So even if your hormone levels are normal, the key to losing man boobs is to still focus on boosting testosterone and reducing estrogen using my methods.

Some methods are better at changing hormone sensitivity than others. The indian spice turmeric for example, its main mode of action is to block estrogen on a cellular level. That means its main job is to reduce estrogen sensitivity, this is just what you want if you want to lose man boobs.

The other cool thing about turmeric, is that not only does it decrease leptin levels, it also improves leptin sensitivity7!

I had actually completely forgotten about this effect until I was reading about leptin just recently.

I wrote about it a while ago in this article:

Leptin acts on your BRAIN to reduce hunger, and turmeric sensitizes your brain to leptin.

I said in the article,

“Substance A [turmeric] sensitizes your brain to a hormone called leptin. Leptin is known to be a satiety signal that acts on the brain to decrease your appetite.

With your brain sensitized to leptin, you won’t feel hungry so much, and you’ll no longer be controlled by that urge to stuff your face with junk food. You’ll finally be in control of what you eat and how much you eat.”

So get to it, start including turmeric in your meals, get yourself a good turmeric supplement and lower your weight set-point AND reduce your man boobs with this estrogen blocking and leptin sensitizing all-natural harmless natural supplement.

And that's not all, turmeric helps you lose man boobs via several other mechanisms, which you can read about here:

And don't stop at turmeric.

Get on top of the game and knock out those man boobs with a one-two punch by combining turmeric with the multitude of other natural man boob busting methods I reveal in my program, How To Lose Man Boobs Naturally, here:

So when you use my natural methods to boost testosterone, reduce estrogen, and improve insulin sensitivity, you'll be changing leptin and leptin sensitivity in all the right ways too.

The point about learning about leptin, is it helps to pick out certain things that boost leptin sensitivity particularly well, the likes of turmeric, and other changes I'll be writing about in future articles.