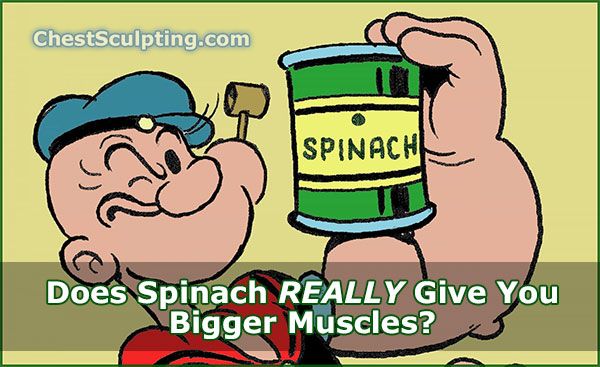 Back when I was younger I broke my left leg in a bad way TWICE in the same place.

The second time I broke it was 20 years ago.

Today I've got a metal rod going through my bone to hold the leg together.

Every now and then I can feel this niggling pain in my leg, and I think it's because I regularly get stress fractures in this leg.

What I decided to do when I get these stress fractures, is I eat a cereal bowl's worth of RAW SPINACH one to three times a day. 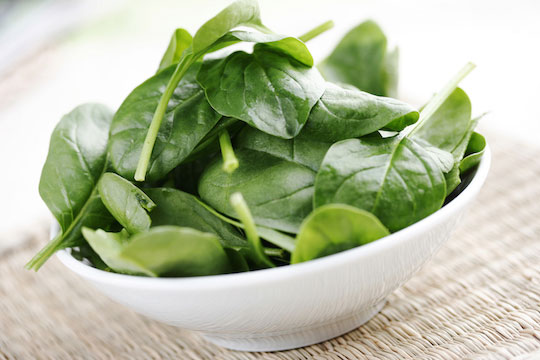 But When I Started Eating Spinach, I Noticed Something Funny

I started getting seriously muscular.

The only change I made was I was regularly eating raw spinach.

I started to get seriously beefed up, like I was taking steroids.

I couldn't wear my regular 15.5 inch neck shirts anymore, my arms, shoulders and chest were just too big, my shirts were too tight.

It didn't take me long to realize it was the spinach.

Damn! PopEye The Sailer Man Was Right All Along!!!

The cartoon wasn't exaggerating after all! (OK, maybe it was a little bit)

Popeye was right all along, spinach DOES make you stronger!

Spinach, RAW spinach, can beef you up like you're on steroids.

This can come in handy on your road to losing man boobs.

This is because with bigger muscles you burn more calories, and you get bigger testosterone boosts from your workouts.

That's why in my weight training program for losing man boobs, called the Chest Sculpting Blueprint, I show you how to train in the hypertrophy range to maximize muscle growth.

So why is RAW spinach so good at boosting muscle growth AND at helping you burn fat?

As the name suggests, phytoecdysteroids are a form of steroid, ANABOLIC steroid nonetheless.

They act like human anabolic steroids to help boost muscle growth, but WITHOUT the side effects.

Phytoecdysteroids are said to possess anabolic activity similar to steranobol, an artifical anabolic steroid that has been banned because of its performance enhancing ability in sports.

One study on muscle cells in a culture medium, found that phytoecdysteroids can improve muscle growth by up to 20%.

In the same study, rats injected with phytoecdysteroids for a month were found to have increased grip strength.

I can go on and on about different studies that prove the muscle boosting properties of phytoecdysteroids. The pharmaceutical industry is using phytoecdysteroids as a base from which to formulate anabolic drugs they can patent and profit from. They'll never come out and say, “Hey, just eat spinach”, because there's no profit in it for them. They can't patent spinach and sell it for an inflated price.

Besides phytoecdysteroids, spinach is also among the richest sources of nitrates, which studies show enhance exercise performance and boost muscle contractile force.

Spinach is also packed full of a whole bunch of other vitamins and minerals, including folate, selenium, glutathione, and vitamin E, which play an important role in boosting testosterone. Testosterone both helps you lose man boobs and boost muscle growth.

Phytoecdysteroids Have Also Been Shown To Help You Lose Weight

They also help burn fat by stimulating thermogenesis, where energy from fat is converted to heat.

Give spinach a go and see how it works for you.

What do you have to lose?

At worst, if your muscles don't get bigger and your man boobs smaller, it will at least improve your health and strengthen your bones.

Like turmeric, spinach is a natural whole-food that can help you lose your man boobs, build muscle, and get in shape, WITHOUT any side-effects like you get with drugs and surgery.

How To Take Spinach To Beef Up Those Muscles

Spinach maintains much of its nutritional value when you lightly steam it, and I didn't find anything in my research that suggested phytoecdysteroids are damaged by heat. So you COULD lightly steam it, but try it raw at first, because that's what worked for me.

If you do steam it, don't overcook it. When it goes dark green and soggy, then you've lost much of the nutritional value. I've eaten a whole load of overcooked spinach in the past and it seemed to do NOTHING for me.

How To EASILY Down A Bowl Of Raw Spinach

Raw spinach stinks. It's bitter, nasty, and takes ages to chew and swallow.

It can be a real chore to chow this stuff down, but I've found a way to EASILY chow down a whole bowl's worth without having to put up with the awful bitter taste.

Here's how I did it this evening: 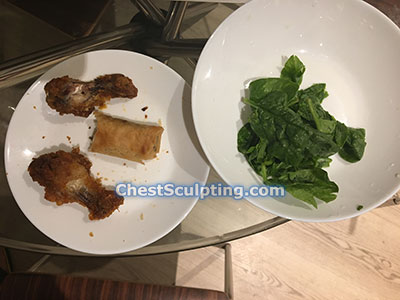 The secret to eating raw spinach is to chow it down with another piece of food that has a strong flavor you enjoy. Take a bite of that enjoyable food, stuff in half a handful of spinach WITH it, and chew away. You'll barely notice the spinach is there. You'll be aware of the texture and volume of the spinach, but not the bitter flavor, and it will be easier to chew and swallow the spinach.

The key here is to eat spinach with something that's tasty and has a strong flavor. Those chicken wings have a very strong flavor, which is why most people eat them with FRIES.

Fries have a mellow flavor and the two balance out.

This works REALLY well, try it and you'll see what I mean. It's 10x easier to eat spinach WITH something else that's tasty, than eating spinach on its own.

Chewing the chicken wing makes it easier to chew and swallow the spinach.

This way you can easily finish a whole BAG of spinach in one go, and actually ENJOY the process!

This is my little secret to increasing your raw spinach intake and making the process enjoyable. It's a powerful tip, please do give it a try.

Now, those fried chicken wings from my local fried chicken joint are far from healthy. For a healthier option, you can use chicken fried at home in a healthy fat like coconut oil, grilled chicken, grilled/fried fish, etc.

Method #1 above is great for when you've got a large amount of spinach to down.

Method #2 could have an even more powerful effect on your body, because it involves having a smaller amount of spinach more regularly.

What you do is…

No cutlery needed, no washing up, no heating other food.

I remember seeing this picture one day that stuck to my head. It was a picture of this bodybuilder with a huge muscular body eating a bowl of raw salad. It was a very colorful salad with green, red and yellow peppers, shredded carrot, and leafy greens. My memory of this image frequently reminds me that I need to eat raw veggies if I want to grow muscle: 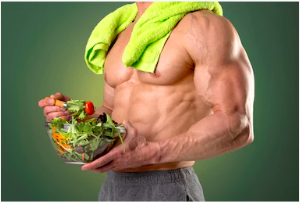 Remember to combine spinach with a good overall diet and a good workout regimen. If you want bigger muscles, AND you want to lose man boobs, I would recommend training Chest Sculpting Blueprint-style. You can learn more about this program here:

I know that the phytoecdysteroid in the study helped mice grow muscle even without training, but if you want big noticeable changes in your physique, you'll want to combine spinach with a good resistance training program.

4 thoughts on “Spinach: A Natural Source Of Anabolic Steroids That Give You Bigger Muscles”