If you have man boobs, then the enzyme aromatase is one of your biggest enemies.

The reason aromatase is so extraordinarily bad, is that it directly converts your hard earned testosterone into the female hormone estrogen.

Men get almost all of their estrogen from the conversion of testosterone to estrogen by the enzyme aromatase.

A viable strategy to lose man boobs could be to focus only on one thing: blocking or reducing the activity of the enzyme aromatase as much as possible.

One of my clients wrote to me and told me the story of how his estradiol went from 25 pg/ml to 79 pg/ml when he quit eating mushrooms for dinner with no other change that he knew of.

“I had symptoms of high estradiol, but started making sure to include plenty of cruciferous vegetables, mushrooms, and a moderate amount of soy in my diet. Don't know what worked or what didn't, or if it just would have worked out on its own, but my estradiol is now actually on the low side. I make sure to eat mushrooms at least once a week. It's not a burden, they're cheap, nutritious and I really like them, so even if they aren't doing anything, there's no loss.”

This got me to do a little research and I found out that he was likely onto something.

Here's what the study found: 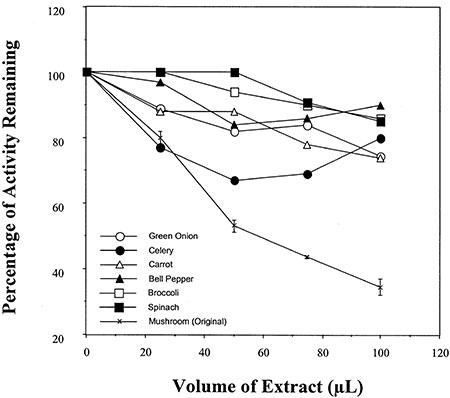 See how the mushroom extract caused a greater reduction in aromatase activity than all the other vegetable extracts?

Now this isn't to say that mushrooms are better than all of these other veggies at helping you to get rid of man boobs.

The researchers used “heat stable extracts” in this study. With broccoli for example, the main component that helps get rid of man boobs is indole-3-carbinol (I3C), which is not heat-stable, and so was not used in this study. Also, I3C's big thing is not to block aromatase, but rather to convert estrogen to less potent forms.

But what this study does show, is that when it comes to cooked food that blocks aromatase, out of the 7 vegetables tested, the mushroom is king!

What's really cool here is that mushrooms help block aromatase activity in their cooked state. The researchers said, “The active component in the mushroom extract appeared to be water soluble and heat stable”.

So if you can't stand raw or lightly steamed broccoli, then mushrooms could be your daily man-boob-busting food of choice!

I don't know about you, but though my girlfriend hates mushrooms, I'm totally in love with them! I like to fry them up in slices on a skillet with butter. You need not add a single grain of salt, and the flavor bursting out of these little babies is heavenly.

Which Type Of Mushroom Is Best?

The same awesome researchers of the above study decided to go and find out if aromatase inhibition was unique to the white button mushroom.

Here's what they found: 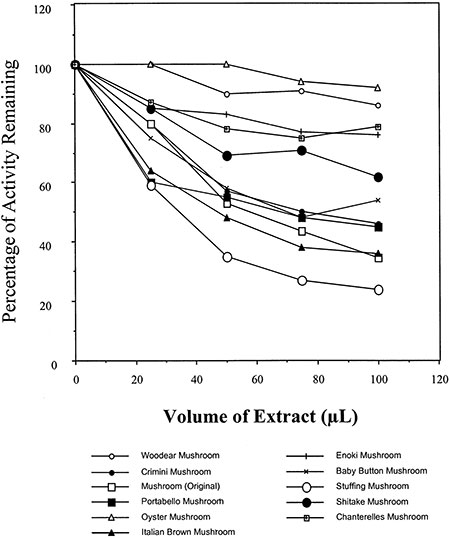 As you can see, the stuffing mushroom had the greatest effect on inhibiting aromatase. The white button mushroom and Italian brown mushrooms were a close second. The shiitake, portabello, crimini and baby button mushrooms all did pretty well.

Lowering estrogen will do more for you than just help you lose your man boobs.

Studies are showing more and more, how increased levels of estrogen are involved in the aging process in men.

The whole thing about testosterone being the culprit, never really made any sense.

Both problems are thought to be caused by high testosterone levels, which is why the treatment for both conditions is the testosterone-lowering drug, propecia.

Don't we have our highest testosterone levels when we are young–in our teens and early twenties?

If high testosterone is the main cause of hair loss and an enlarged prostate, then it stands to reason that it should be teenage boys that suffer from these two conditions the most, not men in their 50's and 60's.

The truth is, there is more going on here than just testosterone.

Estrogen is involved to a great degree, and the studies are suggesting it's high levels of estrogen that is responsible for common problems we men face with age–including prostate enlargement, prostate cancer, hair loss, heart disease, and erectile dysfunction.

How To Incorporate Mushrooms In Your Diet

Slice 'em, roast 'em whole, fry them, steam them, have 'em raw, it doesn't matter. Have them for breakfast, lunch, dinner, eat them daily or a few times a week.

And here's a question I have for you. What in the world is a “stuffing mushroom”??? I typed it into google, and all I get is a bunch of stuffed mushroom recipes. If you know what a stuffing mushroom is, please email me and let me know. Meanwhile, I'm going to stick to my cheap, always-available, white button shrooms.