Water is good for you.

Every system in your body depends on water. Water carries nutrients to your cells, it flushes toxins out of your organs, raises your metabolism, regulates blood pressure, protects and moisturizes your joints… the list goes on.

When you don’t drink enough water, everything in your body slows down. Even very mild dehydration can rob you of your energy and make you feel tired throughout the day.

When you drink plenty of water and you are well hydrated, it will give you more energy, improve your mood, help you lose weight and grow muscles, help you perform better at work, relieve headaches, make you look younger with healthier skin, reduce risk of cancer… the benefits really do go on and on.

It’s funny then how we are all so concerned about eating healthy food, yet give little or no thought to whether our water is healthy or not.

The truth is, most sources of drinking water in the West, are far from healthy.

Drinking most sources of bottled water, or unfiltered tap water is like the water equivalent to eating fast food.

Now don’t get me wrong, it’s better to drink this water than to avoid it (and die of dehydration), but it’s a bit unsettling knowing that with every glass you guzzle down, you’re taking in hundreds of different unregulated, unfiltered chemicals and toxic waste products.

Government and state regulations in the U.S. don’t require any testing and haven’t set safety limits for drugs in water.

Now it’s true that the concentrations of these drugs and chemicals are tiny – measured in parts per billion or trillion – far below a medical dose. Water providers continue to insist that these levels are ‘safe’, but the truth is, scientists don’t yet know the consequences of decades of exposure to low levels of multiple dugs.

One thing we do know is that scientists are becoming increasingly concerned by recent studies which show alarming effects on wildlife and human cells.

Many scientists believe that chronic low level exposure to these drugs and other toxins, could be subtly bringing on allergies, causing nerve damage, hampering fertility and development, damaging the brain and changing behavior, causing cancer and a multitude of other problems and diseases.

Even the assistant administrator for water at the U.S. Environmental Protection Agency, Benjamin Grumbles, said: “We recognize it is a growing concern and we're taking it very seriously.”

Between 1999 and 2000, the U.S. Geological Survey sampled 139 surface waters throughout the U.S. They discovered that 80% of these waters contained endocrine disrupting chemicals (mostly estrogens).

What’s more disturbing, is the effects these estrogens are now having on wildlife. Fish, in the very waters we end up drinking, are changing sex due to exposure to excess estrogen.

In 2004, researchers collected and studied a sample of white sucker fish in Boulder Creek, Colorado. Not only did they find five times more females than males, but half of the male fish had female tissue, and the entire population was sterile.

It’s funny (or maybe not so funny) how we can see a similar trend in humans, with reducing sperm counts in men, lower testosterone levels than in past generations, rising rates of infertility, and more females being born than males.

Though to date, research hasn’t shown a direct link between the water we drink and feminization in humans, there’s plenty of indirect evidence that suggests estrogen in our drinking water is at least playing a big role in our feminization as a species, along with all the other sources of estrogen we’re exposed to on a daily basis.

How Estrogen Gets Into Your Drinking Water

Well a lot of it comes from the use of the oral contraceptive pill by women. The pill causes women to pass massive amounts of estrogen through their urine, which makes its way to our water systems.

Depending on which country you look at, up to 60% of women in the West are on the pill, and figures in the East are rising rapidly. Hormone replacement therapy (HRT) in older women is also to blame, and with people living longer and longer, it's becoming a rising concern.

In a 2011 study published in BMJ Open, researchers suggested there might be a link between oral contraceptive use by women, and rising rates of prostate cancer (an estrogen-sensitive cancer) in men, due to the excess estrogen from women making its way into our drinking water.

Here’s a diagram that shows you a simplified outline of where estrogen in our drinking water comes from. 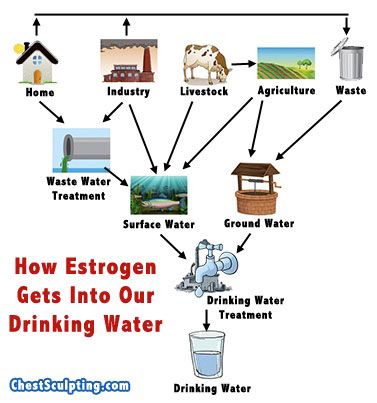 What Are The Effects of Too Much Estrogen?

The list of different symptoms and conditions estrogen dominance can cause, is huge. I’ve listed some of the more common effects below. For a more comprehensive list, go here.

In Men and Women

It’s no coincidence that the above symptoms and conditions are becoming more common over time as more chemicals are being pumped into the environment.

Is Bottled Water A Good Alternative?

Tap water is far more regulated by the government than bottled water.

Under the Federal Safe Drinking Water Act, public water systems that provide you with tap water, have to submit annual quality reports that reveal sources and levels of regulated contaminants, and their potential health effects.

Bottled water is not nearly as regulated as tap water in the U.S. Most brands of bottled water are just as polluted as tap water, and in addition, contain estrogen-like phthalates that leak into the water from the plastic in the bottle.

On the other hand, bottled water companies who sell their products to millions of people, are not required to make any of this public. With most brands we have no idea where the water comes from, whether or not it’s purified at all, and what level of contaminants the water contains.

In recent years there have been a number of studies conducted by independent non-profit organizations, that have revealed some alarming facts about bottled water.

In 2008, the Environmental Working Group (EWG) analyzed 10 leading brands of bottled water, and found toxic contaminants in every brand that was tested. There were a total of 38 toxic pollutants, including trihalomethanes, pharmaceutical drugs, caffeine, solvents, arsenic and radioactive isotopes.

In a 2009 study published in the journal Environmental Science and Pollution Research, researchers found significant amounts of estrogen in 78% of plastic water bottle brands.

In addition to impurities in the water itself, bottled water also contains phthalates, a type of plasticizer that leaches into the water from the bottle itself. Phthalates act as powerful xenoestrogens, and have been linked to various estrogen-sensitive cancers and other conditions in humans.

Though standards are slowly improving, you have to ask yourself – keeping in mind that bottled water costs 1,900 times as much as tap water – is it really worth paying the extra cost for water that is at best, just as contaminated as tap water?

If you’re on the go and tap water is out of the question, the EWG has a scorecard that lists popular brands of bottled water based on their level of transparency.

The brands that are “best on transparency” listed below, reveal information about the location of their water source, what water treatment methods they use, and post purity testing online.

The “worst on transparency” reveal none of this information. You can get a more detailed list on the EWG website.

But the EWG recommends a better option than Gerber, Nestle and Penta. Find out about this option in Part 2 of this article.

Estrogen in Water Part 2: What Is The Ultimate Best Source of Drinking Water? ->

3 thoughts on “The Dangers of Estrogen in your Drinking Water”