If you've got man boobs, it means you've got extra fat on your chest.

That's why losing man boobs has a LOT to do with controlling the body’s most powerful fat storage hormone.

Different hormones in your body regulate fat storage—testosterone, growth hormone, estrogen, cortisol, leptin, insulin, and others, but if I had to pick the one hormone that has by far the most important role in fat regulation, it would be the hormone insulin.

In this article, I'm going to show you…

Let's start with the basics…

What Does Insulin Do?

Insulin takes sugar out of your blood, and stores it in your liver and muscles in the form of glycogen. That’s why people with diabetes, who either don’t produce any insulin (type I diabetes), or their cells don’t respond to insulin (type II diabetes), end up with too much sugar in their blood.

When your liver and muscles are fully stocked up with glycogen, insulin instructs your liver to convert any further sugar in your blood into fat in the form of triglycerides. These triglycerides are then stored in fat cells, which is how you get fat.

And Here's What Most People Don't Know…

There would be little point in insulin going to the trouble of storing all of that fat in your chest, only for your body to quickly break up the fat and release it back into your bloodstream again.

But fear not, because insulin is a clever little bugger with multiple talents.

Insulin doesn’t just store fat, it also inhibits the breakdown of fat, which means it makes sure all of that excess fat STAYS stored in your chest. 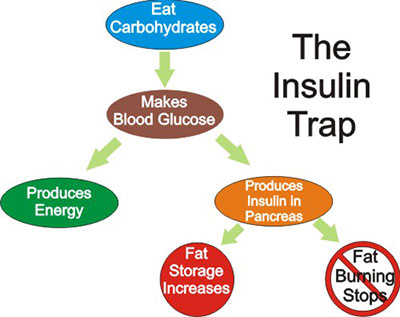 So as long as your insulin levels are high, your body is physically incapable of breaking down fat.

You can exercise till you're blue in the face, or restrict your calories all you like, as long as your insulin levels are high, that fat in your man boobs is going NOWHERE!

The problem isn't the occasional rise in insulin after a meal, the problem is chronically elevated insulin, where your insulin levels are high all day and all night, so your body can never burn any fat.

So What Gives You Chronically Elevated Insulin Levels?

When you eat too many carbs, eat too much food in general, and don’t work out enough, your body releases more and more insulin to shuttle those sugars out of your blood and into your cells.

But your body still needs to get rid of all that sugar in your blood, so all it can do is release more and more insulin to try and force more of the sugar from your blood into your cells.

So when you have insulin resistance, you end up with chronically elevated levels of insulin in your blood.

Because of all the extra insulin hanging around in your blood, your body has a hard time burning any fat.

Studies also show that the more insulin resistant you are, the lower your testosterone levels, which means the harder it will be for you to get rid of your man boobs.

How Do You Make Those Insulin Levels Go Down So You Can Burn Fat, Boost Testosterone, And Lose Those Man Boobs?

Insulin sensitivity is the opposite of insulin resistance.

To keep your insulin levels down, you need to boost insulin sensitivity.

When your cells are insulin sensitive, it means your body needs to release smaller amounts of insulin to do the crucial job of moving glucose from your blood into your cells.

The more insulin sensitive you are, the less insulin there is in your blood, and the easier it is for your body to burn fat.

Not only that, but the less insulin hanging around in the blood, the higher your testosterone levels, and the easier it is to lose those darn man boobs. 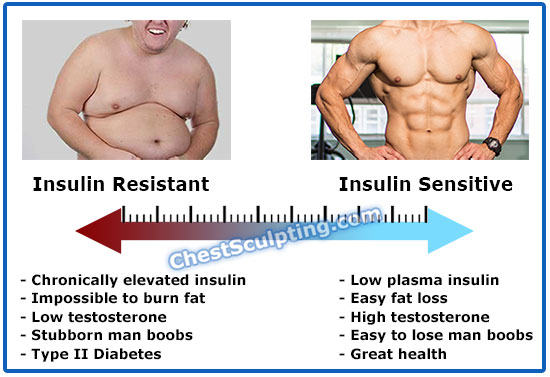 Carbohydrates are the #1 macronutrient responsible for unopposed insulin secretion and subsequent insulin resistance. That’s why to lose man boobs I recommend going on a low carb diet. Avoid sugar, grains, and starchy veggies like potatoes.

This is the most important thing you can do to boost insulin sensitivity. If your diet is crap, nothing else will help you. 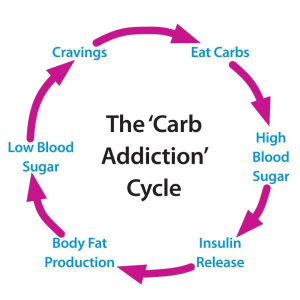 A good defense is the most important thing you can do, but if you want fast results, you're going to have to put in some offensive maneuvers as well.

Another great way to boost insulin sensitivity is via intermittent fasting. You become insulin resistant when you are constantly overeating and eating high carb food, where your cells are constantly bombarded by insulin. With intermittent fasting on the other hand, you give your body long periods of time where the need for insulin is totally minimized, giving your cells a chance to recover their natural sensitivity to insulin.

Yet another thing we can use to deal a powerful offensive blow to insulin resistance, is turmeric…

What Makes Turmeric So Powerful At Skyrocketing Insulin Sensitivity?

A 2009 study found that curcumin, the most widely studied component of turmeric, was 400 to 100,000 times more effective than the anti-diabetic drug Metformin at activating glucose uptake by liver cells.

Increasing glucose uptake by cells is what insulin does, so curcumin is either replacing insulin, or making insulin more effective at its job. Either way, this means less insulin is needed by your body, thereby boosting insulin sensitivity and allowing your body to burn fat.

The same study also found that curcumin inhibits glucose production by the liver. This further reduces how much insulin is needed by your body. Since your cells are not bombarded by insulin so much, they become more insulin sensitive.

Turmeric also makes you better at converting glucose into its storage form, glycogen, with studies showing that curcumin supplementation leads to more glycogen storage in both the liver and in the muscles.

This is a REALLY cool thing about turmeric, here's why:

More glycogen stashed away in your muscles means bigger muscles, and better exercise tolerance, where you have more energy, you can push harder in your training, train for longer, and train more frequently.

Also, when you get better at converting glucose to glycogen, you get less glucose floating around in your blood, and less need for insulin to shuttle that glucose away into your cells. This is yet another way curcumin leads to better insulin sensitivity.

Adiponectin is an important fat-busting hormone. It…

Studies show that lean people have higher levels of adiponectin than fat people and people with insulin resistance and diabetes.

Turmeric boosts insulin sensitivity SO MUCH, that in this study, it prevented diabetes in 100% of subjects!

In a 2012 study of 240 pre-diabetic patients (the same study as the adiponectin study above) the subjects were randomly assigned to receive either curcumin or placebo capsules for 9 months. By the end of the study, 16.4% of subjects in the placebo group were diagnosed with type II diabetes, while none were diagnosed with type II diabetes in the curcumin-treated group.

There are a whole load of other mechanisms via which turmeric boosts insulin sensitivity, but I think you get the picture.

So Here’s The Bottom Line, And Here's What You Need To Do To Lose Your Man Boobs

All the science mumbo jumbo aside, the bottom line is insulin is HUGE. It’s the most important fat storage hormone there is, so if you want to lose weight or lose man boobs, you need to totally flat-line, kill and obliterate those insulin levels.

Curcumin in turmeric is so good at boosting insulin sensitivity, that one 2011 study claimed its effects were comparable to the anti diabetic insulin sensitizing drug, Rosiglitazone.

We already know that turmeric can help you lose man boobs by blocking estrogen and reducing chronic inflammation. And now we know that turmeric also improves insulin sensitivity, making it a triple-action man boob busting super-herb.

So if you have man boobs, there’s really no excuse, if any one ingredient can help you on its own, it’s turmeric, and you’ve got to at least give this herb a try.

To get started, check out this article on different ways you can take turmeric:

My favorite method though, is to take a good turmeric supplement. If you pick the right supplement, not only is it effective at shrinking man boobs and tightening up those puffy nipples, but it’s also far more convenient than just adding turmeric to your food.

Click here to check out the turmeric supplement that I'm currently using (U.S. Only)

If you live outside the U.S., click the following link to learn 5 must-have criteria for the best turmeric supplements, so you know how to pick the good ones: