The number of guys with man boobs has skyrocketed since the 1980’s, and it’s only getting worse. It's all over the news, man boobs are rising, sperm counts are dropping, testosterone levels are dwindling, men are no longer as virile as they used to be.

But why is all this happening? Why are we losing our masculinity and growing man boobs?

Well I'm going to tell you why in this very article. Not only that, I'll also give you 7 ways you can avoid these changes, and 1 powerful method you can use to fight back and reverse the changes, so you can start shrinking down those man boobs.

So What’s Different Today That Has Caused Guys Like You And Me To Grow Man Boobs?

There’s something fishy going on in our environment that’s making more and more guys grow man boobs. The industry that's responsible is worth 3.7 trillion dollars, and the government is powerless to stop it.

This industry is the global chemical industry.

The one biggest change since the 1980’s that has resulted in more and more guys having man boobs, is the use of hormone disrupting chemicals that have made their way into our food, our water supply, in the cosmetics we apply on our skin, and in the very air we breathe. 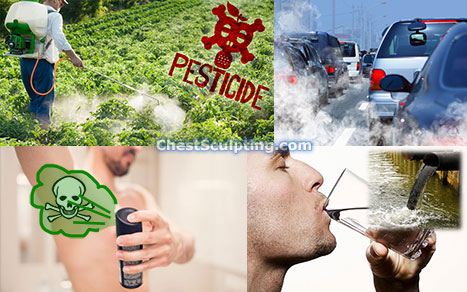 Feminizing estrogenic chemicals are in the food we eat, the water we drink, the cosmetics we apply on our skin, and in the very air we breathe.

The big problem for us guys is that so many of these chemicals mimic the female hormone estrogen. Estrogen dominance in men is the #1 cause of man boobs.

Estrogen dominance also causes the following conditions in men, take a look and see if you notice a pattern:

Here it is: all of these conditions, including man boobs, are more common today than they ever were before.

In fact, the prevalence of every one of these conditions started to skyrocket from the 1960's to the 1980's and beyond, around the same time as the use of chemicals shot up. Check out the following graph: 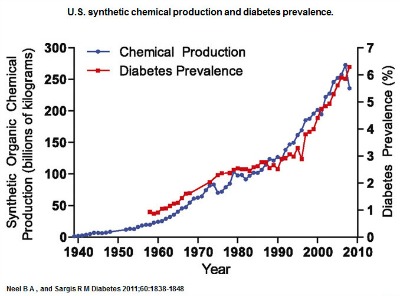 It's not just the prevalence of diabetes that shot up ever since the use of industrial chemicals shot up in the 1960's, but also obesity, heart disease, and even man boobs.

It's no coincidence that all of these hormone-related conditions are on the rise at the same pace as the use of hormone disrupting chemicals in our environment.

Chemicals are a real bitch, and if you read on, I'll prove to you how you can be 100% sure that YOUR man boobs were caused, at least in part, by estrogenic chemicals.

A SHOCKING Percentage Of People In The U.S. Have Chemicals In Their Urine

But BPA is just one chemical. Today there are thousands of other known estrogen-like chemicals (called “xenoestrogens”) in use. So it’s not a stretch to say 100% of us have some level of xenoestrogens built up in our bodies.

But Does Having Small Amounts Of These Chemicals In Your Body Actually Cause Man Boobs?

A 2005 study in the journal, Endocrinology, showed that BPA exposure at “low, environmentally relevant doses” lead to enlarged breast glands and an increased sensitivity of breast glands to estrogen. Other more recent studies have confirmed this also.

In a 2010 study published in the journal, Pediatrics, researchers tested the urine of 40 boys with pubertal gynecomastia and 21 boys with normal chests for traces of two common phthalates, DEHP and MEHP (phthalates, by the way, are common estrogenic chemicals found in EVERY U.S. household). Compared to the normal boys, the boys with pubertal gynecomastia had 51% higher levels of DEHP and 133% higher levels of MEHP in their urine.

I could list more studies, but I think you get the picture–almost EVERYONE in the modern world is exposed to feminizing chemicals, and we're exposed at levels that studies have shown can cause man boobs.

To hammer the point home, there’s a BIG chance that FEMINIZING CHEMICALS ARE THE REASON YOU HAVE MAN BOOBS!

How Do You Reduce Your Exposure To Xenoestrogens, So You At Least Stand A Chance Of Losing Your Man Boobs?

7 Ways To Reduce Your Exposure To Estrogenic Chemicals

Eat organic food wherever you can, because almost all non-organic foods are treated with fertilizers, pesticides, herbicides, fungicides, hormones, antibiotics, and other drugs, many of which are known hormone disruptors. 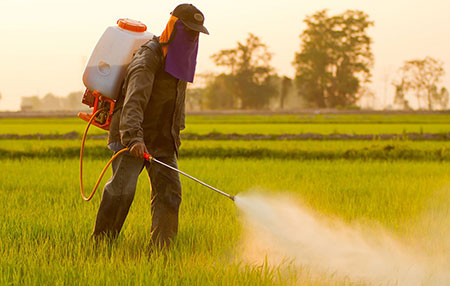 If pesticides were safe, the guy in the above picture wouldn't be covering his face. If you eat food that isn't organic, chances are there are traces of pesticide in your food. Studies show that many widely used pesticides have estrogenic properties.

Avoid plastic food containers and plastic bottles, because almost all plastics contain either BPA or some other estrogenic chemical. Store your food in glass or ceramic containers and drink from glass bottles instead. Don’t be fooled by “BPA free” plastics, as studies show these plastics contain other chemicals that are just as bad (see here, here, and here).

Get a reverse osmosis water filter at home, because both tap water and bottled water are contaminated with estrogenic chemicals. Reverse osmosis is effective at removing estrogen.

73% of canned food is contaminated with BPA. This includes not just canned fish, meat, veggies, and fruit, but also canned sodas.

Only use natural cleaning products in your home, because the standard everyday stuff contains estrogenic preservatives, dissolving agents, and fragrances, which enter your bloodstream through your lungs.

Switch to natural brands of toiletries, including soap, shampoo, toothpaste, antiperspirants and cosmetics. The standard toiletries everybody uses contain estrogenic chemicals like pthalates and parabens, which can seep through the skin and directly enter your bloodstream.

But You’ll Never Avoid It All…

You can make all of the above changes, and yet there’ll still be traces of xenoestrogens in your blood, because the use of environmental chemicals is too widespread today for any of us to be able to avoid it all.

“There is no escape from BPA — for any living creature.”

One reason BPA is in some 92.6% of the U.S. population is because it gets into the air during its manufacture and while burning it for disposal. You can avoid plastic bottles and canned food all you like, but how will you avoid it when it’s in the very air you breathe?

In a 2003 study, researchers sampled the air and dust in 120 residential homes in the U.S. They found 13 to 28 hormone disrupting chemicals (HDCs) per home in air and 6 to 42 HDCs per home in dust.

100% of homes had HDCs like phthalates, nonylphenol, and 0-phenylphenol in the air and dust. Dude, these are commonly-known feminizing estrogenic chemicals, and THEY'RE IN EVERY HOUSEHOLD!

Where do these chemicals come from?

And it gets worse!

The researchers said that the concentrations of 15 of these HDCs exceeded government regulations, and the government didn't even have regulations for 28 other HDCs.

So if government guidelines aren't being complied with, and the government isn't even bothered to SET guidelines for a whole bunch of other KNOWN hormone disruptors, then WHO THE HELL IS LOOKING AFTER OUR HEALTH?!!

And if you think that's bad, wait till you hear this:

Here's the SCARIEST finding in this study:

I mean, you may be thinking, “Meh, big deal, there's some feminizing particles in the air of my very home, their levels exceed government regulations, but I'll just breathe that stuff in and breathe it out, it's not doing anything to me”.

But is that true?

So if feminizing chemicals are in the air, what are you going to do? Stop breathing? Walk around wearing a mask all day? Leave the country and live out the rest of your life in the North Pole?

Thankfully, none of these drastic measures are necessary, because nature has given us the answer.

Thankfully, nature has left us a powerful all-natural estrogen blocker that can help men like us get rid of man boobs by protecting us against xenoestrogens.

This estrogen blocker is the indian herb turmeric.

Turmeric works by blocking estrogen receptors on the cellular level, hence reducing the sensitivity of your breast tissue to estrogen.

Turmeric is so powerful at blocking the effects of estrogen, that studies have suggested the effects of this herb are comparable to the pharmaceutical estrogen blocking drug tamoxifen, which is used to treat estrogen sensitive breast cancer.

For example, in one study on human breast cancer cells, curcumin (the most widely studied component of turmeric) reversed growth caused by 17b-estradiol by 98%.

Not only does turmeric block high levels of human estrogens produced in your own body, it also blocks estrogen-mimicking chemicals (i.e. xenoestrogens).

In the same study, two other estrogen mimickers were tested for their ability to enhance breast cancer, chlordane and endosulfane (both are insecticides used on crops). Curcumin reversed breast cancer growth caused by these chemicals by about 90%.

BPA is a big deal when it comes to man boobs.

According to wikipedia, BPA, a widely known estrogen mimicker, is one of the highest volume of chemicals produced worldwide. It’s a widely-known estrogen mimicker used to make plastics used in water bottles, sports equipment, CDs and DVDs. BPA is also used to line water pipes, the inside of food cans, and in making thermal paper such as that used in sales receipts. 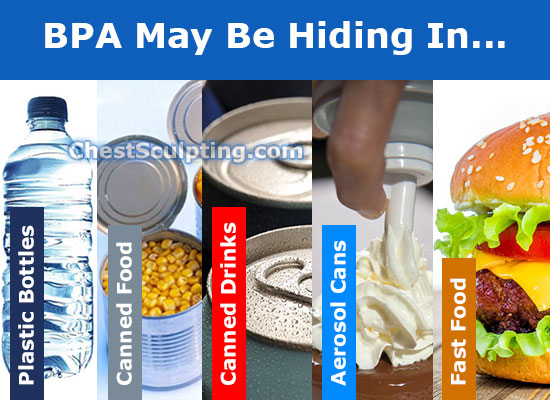 Not only does BPA leach off of tins, water pipes, plastic bottles and plastic containers to contaminate what you eat and drink, it also penetrates your skin and gets into your bloodstream when you touch it.

Estrogenic chemicals like BPA are everywhere in the modern environment, there’s no way you can avoid it all. Every single person in the West is likely affected, which is why I recommend that EVERY SINGLE GUY WITH MAN BOOBS SHOULD TAKE A TURMERIC SUPPLEMENT.

Will Turmeric Help You Lose Your Man Boobs?

Man boobs, breast cancer, and obesity, are all caused by and made worse by high estrogen levels and xenoestrogens.

Though turmeric’s benefits on breast cancer and obesity have been studied extensively, its effects on gynecomastia or man boobs have not. What we DO know, is that all three conditions are caused by estrogen, and turmeric does a great job at blocking estrogen.

I’ve had many clients tell me that turmeric alone has been responsible for shrinking down their puffy nipples, and getting rid of their man boobs.

I expect that in the future, when man boobs become even more common, scientists will do human trials to see if taking turmeric can reduce man boobs.

They’ve already done human trials to see if turmeric helps with breast cancer and obesity, and found that it helps for both.

It’s only a matter of time before someone does a trial on man boobs, and I’m willing to bet they’ll find turmeric shrinks man boobs down very effectively.

But can you afford to wait 30 years for that first clinical trial to happen? Or would you rather get a bottle of turmeric capsules and find out if it works in the next 30 days?

A good turmeric supplement may start shrinking your chest down within a few short days, or it could take up to 30 days, it depends on the individual.

But not all turmeric supplements are the same. If you live in the U.S., I've come across a brand that has a particularly strong anti-estrogen effect. I've found it to be very effective at shrinking down man boobs and puffy nipples.

You can get it here:

If you don't live in the U.S., check out the following article for help finding a good turmeric supplement where you live: