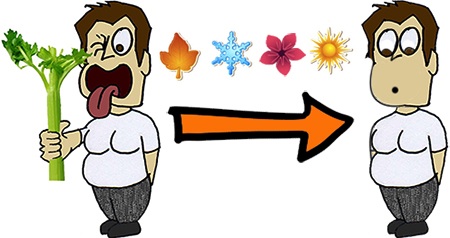 Walk into any bookstore and you'll see shelf after shelf filled with different diet books. Weight loss is a huge industry, and almost everyone these days could do with losing a few extra pounds. With obesity rates increasing as they are, the weight loss industry is only getting bigger.

Unfortunately, with an industry as lucrative as this, there's no limit to how many authors and so-called ‘experts' are jumping on the bandwagon to promote the latest fad. It seems like a new diet is being invented every single day.

If you're into the latest craze, not a day will go by on one diet before another one is invented. And you know, even if you don't jump onto the next newest diet right away, just knowing about what's ‘new' can actually make you lose faith in what you're currently doing.

I think the biggest problem we have today when it comes to both diet and exercise for weight loss, is there's too much noise.

Doctors really make me laugh. They are generally complete idiots when it comes to anything that isn't treated with either surgery or pharmacological drugs. And yet just because it relates to the human body, they go on to act like experts in the field, despite having little or no education at all on it. The bottom line on my little mini-rant here is – if you're looking to lose weight, and your doctor tells you “oh, just eat less and exercise more“… don't listen to 'em.

It's better to listen to a real expert, like UCLA associate professor of psychology (yes, weight loss is all about the mind), Traci Mann. Mann and her co-authors conducted the most rigorous and comprehensive analysis of diet studies, analyzing 31 long-term studies on calorie-restricted diets. In the review, published in the American Psychologist in 2007, Mann concluded that though diets in general can help you lose 5-10% of your weight in the short-term, in the vast majority of cases the subjects ended up gaining all of their weight back and more in the long term.

She also concluded that most of the subjects would've been better off not having gone on a diet in the first place.

A coauthor of the study, Janet Tomiyama, said “Several studies indicate that dieting is actually a consistent predictor of future weight gain.”

How ironic is that? Do you know anyone who's having trouble putting on weight? A friend of mine is a psychiatrist, I think he mentioned having trouble with a young anorexic patient. Maybe I'll tell him about this study so he can put his patient on a diet. That'll make her put some weight on her.

In the end, Mann and her colleagues concluded…

“It appears that dieters who manage to sustain a weight loss are the rare exception, rather than the rule. Dieters who gain back more weight than they lost may very well be the norm, rather than an unlucky minority.”

Studies suggest that people who diet by trying to restrict their calories, end up eating more than people who don't bother to go on a diet at all. The dieters may seem to be eating less (a salad and a carrot for lunch for example), but they inevitably end up binging while nobody's looking.

So calorie restriction doesn't work. And face it, it totally sucks! If you've tried it before, I'm sure you know how utterly miserable it feels to deprive yourself of food. In actual fact, studies have linked calorie-restricted diets to depression. It just isn't worth-it! I'd much rather be fat and happy than skinny and miserable. But I know, we'd all much rather be skinny and happy, and thankfully, there is a way, and it really isn't that difficult.

Having taken your doctor's recommendation of a ‘calorie-restricted diet' out of the equation, we're still left with, oh, say a billion other different types of diets you can follow.

The Diet That Will Work For Getting Rid Of Man Boobs

Now since this is a site on losing chest fat and man boobs, I won't go into detail about the merits and pitfalls of all the different types of diets out there just yet. What I will tell you right now is the one type of diet that is best-suited for guys with man boobs – both for losing weight, and for breast reduction. I also believe this type of diet is by far the ideal for anyone looking to lose weight.

This type of diet focuses mostly on reducing one major hormone in the body. No, it's not estrogen or testosterone (though these are also important). This hormone not only plays an important role in deciding the levels of estrogen and testosterone in your body, but it's also the prime hormone in your body responsible for both fat storage, and preventing fat breakdown.

This hormone is known to be elevated in people who are overweight, and is the reason why most overweight people can't lose weight on a calorie-restricted diet, even if they don't binge and actually take in less calories than they burn through exercise. As long as levels of this hormone are elevated in your blood, it will have a powerful effect on preventing your body from mobilizing its fat stores.

The name of this hormone is…. insulin.