I'm watching the old “Cosmos” documentary from the 1980's by Carl Sagan.

I've always been fascinated by space, and I'm really loving the show.

One thing that really hit me is something Carl said in Episode 9 about stars.

Did you know that aside from hydrogen and helium, all matter in the universe was manufactured inside stars?

That includes everything on Earth – the rocks in the mountains, the sand on the beaches, and even the very stuff you and I are made of!

All of it comes from stars.

We are cosmic beings dude, how cool is that?

Does that not make you feel special?

See, a star (including our sun) starts out as a gas cloud of hydrogen and helium that spirals together and is compressed by its own gravity. 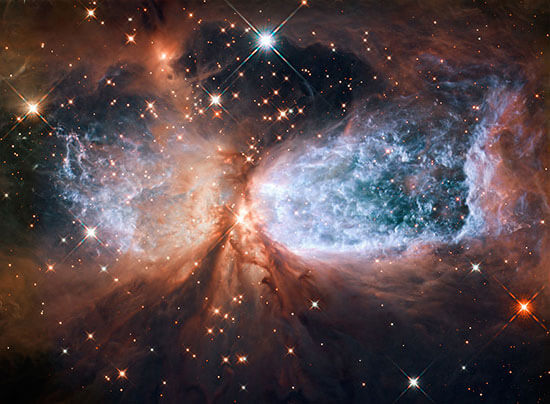 By the process of nuclear fusion, hydrogen atoms are fused together to form the larger helium atom, a process which emits a crazy amount of energy, which is what gives stars their heat and light.

A star dies when it runs out of hydrogen atoms, but the nuclear fusion continues.

All this stuff is blown out into space where it forms new stars and planets like the Earth.

But it didn’t stop there.

Stars didn’t just make us, they influence our lives today.

You know how in the movies you get guys wearing hazmat suits carrying a geiger counter that makes a ticking sound to check for radiation?

Sure, the ticking sound speeds up when they get close to the source of radiation, but notice how the geiger counter is slowly ticking ALL THE TIME, even when there is no dangerous radiation around?

That’s because there is always SOME level of radiation everywhere on Earth, even right now while you are sitting there reading this article, there is radiation all around you, penetrating your body.

Where does this radiation come from?

It comes from cosmic rays from the sun and from other distant stars, in the form of protons moving near the speed of light.

So we were not only formed from star stuff, we are being influenced by the stars every day of our lives.

These cosmic rays influence our DNA, and they are good for us. Our bodies need cosmic rays for optimal health, we don’t know exactly why yet, but studies have found that the growth of single-celled organisms is stunted when they are shielded from surface-level cosmic rays.

So, we were made from stars, and we are still connected to them through cosmic rays.

That makes you very special indeed.

Keep this in mind when you feel down about your man boobs, always remember that you are made from star stuff, and no-one can ever say you are worthless or pathetic. On the contrary, you are a cosmic being.

Stars are huge forces in the universe, a million Earths can fit inside the Sun, and the Sun is only a very small star. The surface of the sun burns at 10,000 °F, its core burns at 27 MILLION °F.

You were born from a star, you have power inside you. You have what it takes to lose your man boobs and achieve anything the hell you want in life.

So get a grip on yourself and get started on achieving your dreams. Your dreams are nothing compared to the potential that lies within you.

And get rid of them damn man boobs first, they hold you back, they’re like a blip on your road to success.

Get yourself a compression shirt, start looking good TODAY, wear it everywhere you go.

Get started on my methods for losing man boobs right now, so you can be free of man boobs just a few weeks from now, and you can finally start looking, acting, and living in a way that resembles a being who was born from the stars.

Get my program here: