Anyone can build a big chest, but most guys have no idea how to get the right proportions that will give you that truly unstoppable, masculine look.

Tell me something. Do you want to look drop-dead gorgeous with people turning their heads to check you out on the beach, or do you want to look like an overgrown freak that makes people wanna throw up when they look at you?

If you’re in the game to look great with stone-slabs for a chest that gets women weak at the knees, then today’s exercise is definitely one you should be doing.

See, most guys who work on their chest, end up getting a huge lower chest because the lower chest is just naturally wired to respond to exercise better than the upper chest.

The lower chest is naturally thicker and more responsive to growth. Guys with an overgrown lower chest end up looking like they have man boobs, even if they don’t have any breast tissue or fat on their chest.

The secret to getting the perfect look, is not to have a sloping chest that sticks out at the bottom, but to have a vertical drop – like a cliff-face – with the upper chest being almost as thick as the lower.

This is important for all guys who want to build a powerful-looking chest, and it’s especially important if you have man boobs, because a thick, muscular upper chest can make your man boobs almost invisible!

Now don’t get me wrong, there are a lot of guys who do understand this, because I see guys at the gym doing incline bench presses all the time, but the trouble with the regular old barbell incline bench press is it targets way too much of the anterior (front) deltoids of the shoulders. 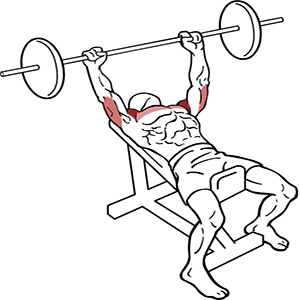 So what’s the solution? How do you work out the upper chest while minimizing the involvement of the shoulders? Well the secret is a powerful exercise that was used by the legendary Steve Reeves to carve out a truly thick set of upper pecs that all his competitors were jealous of.

Who was Steve Reeves? Steve Reeves was the bodybuilding superstar before Arnold. He was one of the biggest icons of modern bodybuilders that ever existed, and has long been considered the pinnacle of the male physique. Born in 1926, Reeves won every major title of his era, retiring from competitive bodybuilding in 1950.

Steve Reeves had perfectly even chest development. He was more concerned about proportionality and looking great, than he was about size.

Now, back in those days, bodybuilding was all about proportionality and achieving the ideal masculine look. Unlike bodybuilding the way it is today, it wasn’t about taking steroids and getting as big as you possibly can. Face it, today’s competitive bodybuilders look like freaks and women and people in general are repulsed by them.

Even most of Reeve’s competitors at the time were open about the fact that Reeves had the perfect male physique. One of Reeves’ most envied body parts was his chest. He had very unique square pec development, with a particularly thick set of upper pecs.

Everyone at the time tried to duplicate Reeve’s results. After questioning him, they found that the secret to his success was the incline dumbbell press. 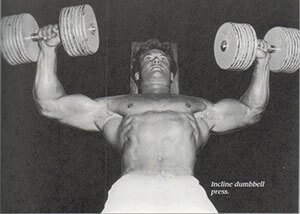 Steve Reeves’ secret to his perfect chest proportions was the incline dumbbell press.

By bringing the dumbbells in at the top, not only do you isolate the pecs (as opposed to the anterior deltoids) better than in the barbell incline press, but you also stimulate those inner fibers near the midline of your upper chest, to really bring out that pec separation line.

Being able to bring your hands together at the top of the movement using dumbbells, is the secret key that Steve Reeves used to develop a thick upper chest that was the envy of all of his competitors.

Although Reeves wasn’t the first guy to ever use dumbbells, he was one of the only guys of that era who was known to use the incline dumbbell press, at a time when everyone else was using barbells. Nobody else knew that dumbbells allow you to isolate the upper pecs better than a barbell ever could.

How To Perform The Incline Dumbbell Press

You can do the incline dumbbell press with your torso anywhere between a 30 and 45 degree angle to the floor.

You will find that you can lift less on an incline press than you can on a flat bench press. This is because the upper portion of the pectoralis major muscle is naturally thinner and weaker than the lower portion.

In case the instructions above aren’t clear enough, here’s a video of the incline dumbbell press in action. This stuff is much easier to see in a video, don’t ask why I bother with the above instructions… eaah ok, I suppose I do it because I have this sneaking suspicion that not everyone likes watching videos.

In this video, I got my chest sculpting expert buddy Mihailo, to do the incline dumbbell press. I did ask him to do it at 45 degrees, but he went ahead and did it at 30 degrees. If you can, I really do prefer that you go at it at 45 degrees.

Ok, so the key to a powerful set of pecs is to develop a thick upper chest, which gives you that square-cut appearance with a vertical drop.

Upper pec development is tough, and most guys get it wrong by either doing barbell incline work, or neglecting incline presses altogether.

The secret to ultimate upper pec development is to do incline dumbbell presses like good ol’ Steve Reeves back in the day when bodybuilding was all about proportionality and looking great as a man.

EMG studies have shown that bringing the dumbbells together at the top, helps not only to isolate the pecs, but also to contract those inner pec fibers, which give you that upper chest thickness.

To really lose man boobs though, as well as using exercises like the incline dumbbell press to develop the upper chest, you also need to lose the fat over that lower chest. When you lose your man boobs (by using the methods I reveal in here) and develop your chest muscles the way Steve Reeves did, you’ll soon be able to take off your top and look good on the beach, at the pool, or in a t-shirt out in the summer sun.

Losing man boobs really isn’t that hard when you know the right way to go about it. When you discover the secrets on how to lose man boobs naturally, you can feel comfortable in a t-shirt or topless just a few short weeks from now. The discoveries I’ve made are somewhat unusual though, but when you get started on these unique methods, I promise you’ll never look at your man boobs in the same way again. You can find out about these unique (somewhat unusual) methods here: