It's this model of the world that helps me easily get back on track if I ever miss a workout.

If you adopt this model of the world, it will serve you well. It will see to it that you lose your man boobs, lose any excess body fat you might have, grow some muscle, and finally build (and easily maintain) that dream physique you've always wanted.

Imagine you were NOT living in the modern world where we have TV's, computers, laptops, phones, cars, supermarkets, Amazon Prime, and everything else that makes our lives convenient.

Imagine instead that you were living in a harsh world where you had to fight to survive. You know, like in those caveman days where our genetically near-identical ancestor, Grok, had to hunt for his food, lift heavy things to build shelter, lift his own bodyweight to get out of danger, and fight rival tribes to survive.

Put yourself in Grok's shoes for a moment.

Grok worked out because he had to in order to survive.

In the modern day, every time you and I decide to exercise, we do it because we want to look better, feel better, or perform better. So each time we have to make that decision to work out.

Grok on the other hand, never had to make that decision

With Grok, something would happen to him FIRST, and exercise would result as a side-effect.

Exercise is something that just happened to Grok, but it rarely just happens to us in the modern day, which means we have to do something differently.

See, anthropologists say that Grok was the most robust form of the human species. They say the average Paleolithic man had the same strength, speed, and lean muscular build as today's most elite Olympic athletes.

One important reason why Grok had such a great build is because he had to exercise no matter what. If he didn't exercise, he would die.

No matter how lazy he was feeling one morning, no matter how busy he was with his day, even when he was sick, if he heard a lion growling just around the corner, he would get off his butt and RUN. Exercise would just happen. It would happen no matter what.

But alas, we don't live in the prehistoric era. Exercise doesn't happen to us the way it happened to Grok (except maybe if road rage forces you out of your car and you get into a fight with a fellow road raged driver).

But here's the thing.

Anthropologists and geneticists say that our bodies are no different from how they were back in the prehistoric era. Genetically, we are 99.998% the same as our Paleolithic ancestor over 10,000 years ago.

When you don't live the way your body was DESIGNED to live, guess what happens? Your body gets weak and frail, you suffer from disease (heart disease, diabetes, cancer and more), and you get fat, obese, and grow man boobs.

So next time you get up in the morning and feel like you just can't be BOTHERED to exercise, ask yourself, “what would Grok do?” Grok wouldn't have a choice BUT to exercise.

Take CHOICE out of the equation. Don't ask yourself, “Do I feel like exercising today?” No, just do it because you have to. Do it because your body EXPECTS you to exercise. 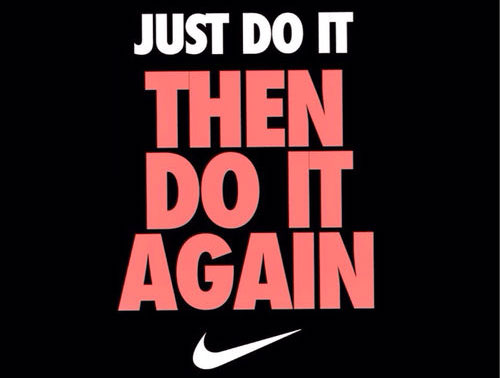 You will feel great after the workout, and you will thank yourself for just doing it. If instead you listen to your mind in the moment and skip the workout, you'll feel like crap for letting yourself down.

Make exercise something you HAVE to do.

Make exercise a part of your routine, just the way Olympic athletes do. If you read up on successful Olympic athletes, the likes of Michael Phelps and Usain Bolt, you'll see that exercise is somewhat of a ritual for them, it's a routine they follow no matter what, no matter how under-the-weather they feel, they don't think about it, they just get in there and DO IT.

If you want a great body, if you want to lose your man boobs, THAT'S what you have to do:

Exercise as though your life depends on it.

And let me tell you something else–your life DOES depend on it.

Paleolithic man exercised because his life was IMMEDIATELY threatened. YOU must exercise because your life is threatened in the long-run. Here's why…

If you don't exercise as though YOUR LIFE IMMEDIATELY DEPENDS ON IT, you may not be torn apart by a saber-toothed tiger, but… 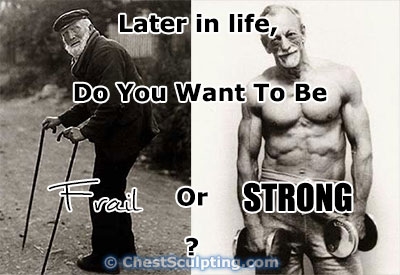 So the key to living a great life, being free of disease, being fit, healthy, strong, great-looking, and without man boobs, is to exercise as though your life depends on it.

Adopt this mindset, and it's only a matter of time before you have that great body and great health you've always wanted.

Oh, and HOW you exercise is important too. For the best results, especially for losing man boobs, exercise the way Paleolithic man did. I'll let Raf tell you about this here: