Both Iron Guru, Vince Gironda, and first ever Mr Olympia winner, Larry Scott (trained by Vince), used the guillotine press instead of the regular bench press, or any other form of bench press for that matter.

When I started out doing the regular ol’ bench press, I did all sorts of different variations and got no results.

I tried the flat, incline and decline bench presses, I tried narrow and wide-grip bench presses, partial-rep bench presses, lifting heavy weights and light weights, I also tried different rep ranges and sets… but nothing I tried seemed to work. My chest muscles were invisible – I couldn’t see them or feel them – the only thing you could see on my chest were my man boobs! And this despite going to the gym and working out relentlessly for over 10 years.

Everything changed for me the day I found out about the Iron Guru, Vince Gironda. I talk about Vince in this article, where I explain why you should probably listen to every piece of advice Vince had to offer. I told you in that article how Vince was reported to have thrown out every bench in his Gym, and replaced them with dipping stations. Now this may not have been entirely true, because there WAS one variation of the bench press that Vince did like – “the guillotine press”, also known as the “neck press”.

Through his understanding of the anatomy of the human musculoskeletal system and exercise dynamics, and also from his 50 years of experience training thousands of guys at his gym, Vince came to the conclusion that the guillotine press, which involves bringing the weight down to your neck, while flaring your elbows out to the sides, stimulates the fan-shaped pectoralis major muscle of the chest better than the regular bench press, or almost any other exercise for that matter.

Now just like most of Vince’s other theories, the latest research, including electromyogram (EMG) studies, show that Vince was right all along. In a recent EMG experiment whose results were published over at T-Nation.com, strength coach Bret Contreras compared 20 different chest exercises to see which ones best stimulated the lower, middle and upper portions of the pectoralis major muscle of the chest.

Contreras came across some interesting results. He found that dumbbell bench presses generally activated those chest muscles better than barbell presses. He also found that the guillotine press beat the hell out of every other form of chest exercise, stimulating more upper, middle and lower pec fibers than any other exercise (aside from weighted dips of course).

The reason the guillotine press is so good at activating the pecs is that by flaring your elbows out and lowering the bar to your neck, you are stimulating those pectoral fibers along their line of axis, allowing them to contract optimally.

See how in the picture below, the pectoral fibers fan out horizontally from the sternum at the midline of your chest, to the top part of the upper arm bone (the humerus). When you fan your elbows out and lower the weight to your neck, the movement is in line with these fibers, allowing both optimal stretching and optimal activation of these fibers. 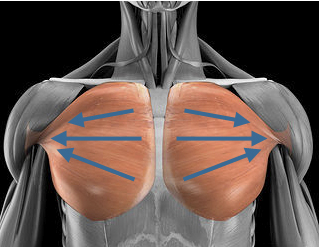 The pectoral fibers fan out horizontally from the sternum to the upper humerus (arrows). The guillotine press directs the contraction path in accordance to the orientation of these fibers, making it a superior chest exercise to the regular bench press.

If you’re looking to save time and want to do just one exercise for the chest, then the guillotine press is an excellent choice, since it provides surprisingly good activation of all fibers throughout the upper, middle and lower portions of the pecs.

“I remember the day I switched from doing regular bench presses to doing the guillotine press. I didn’t think much of it at first – it was a strain on my shoulders and I couldn’t handle as heavy a weight as I could on the regular bench press. But the next day, my entire chest was sore as hell!

That was a sure-fire sign that the guillotine press was stimulating my chest in ways that the regular bench press never could.”

Start with a light weight, and progressively increase the weight as your shoulders become stronger in this position.

If you have any sort of shoulder issues – AC joint pain, rotator cuff issues, etc, then please seek medical advice before you do this exercise.

How To Perform The Guillotine Press

Like I said, start out with a light weight so you don’t get a shoulder injury. It’s also important to have a spotter with you, since you are lowering the weight to your neck – don’t let yourself get guillotined by the bar, eh?

You can either plant your feet on the floor, or raise them up like in the picture below. A lot of people find raising their feet to be more comfortable, because it reduces the arch of the lower back. By raising your legs and reducing the arch of your lower back, you also change your posture in a way that makes the exercise target more of your upper chest. This is the way Vince Gironda recommended you do it.

How To Use The Guillotine Press To Maximize Chest Development

Be sure to use slow and controlled movements, being sure to lower the weight slower than you lift it. Remember, muscle microtrauma happens when you lower the weight with gravity, so slowing down the pace here can earn you lots of extra muscle.

For perfect square pec development, like that of Vince Gironda and Larry Scott, it’s important to do the right number of reps and sets; to rest long enough to allow your muscles to recover, but not so long that you lose the cumulative hypertrophic effect; use progressive resistance, good form, the right antagonizing exercises, and much more – all of which I reveal in the Chest Sculpting Blueprint.

You can learn more about this program here:

The guillotine press is a powerful exercise that very few people know about. EMG studies have shown that it stimulates more of the pectoralis major muscle than any other bench press variation.

An especially important benefit is that the guillotine press stimulates all three portions of the pecs – lower, middle and upper – surprisingly well. This is very important for guys who are looking to build that unstoppable-looking chest.

Building the chest out in every direction to really get that wide, stone-slab-like appearance, is also a powerful method that helps reduce the appearance of excess chest fat and man boobs.

Click the following link to discover how to use exercises like the guillotine press (and some other, more powerful exercises) to help get rid of chest fat, get rid of man boobs, and build a powerful, unstoppable, muscular chest: